Caymanite And Larimar - Semi-Precious Stones Of The Caribbean 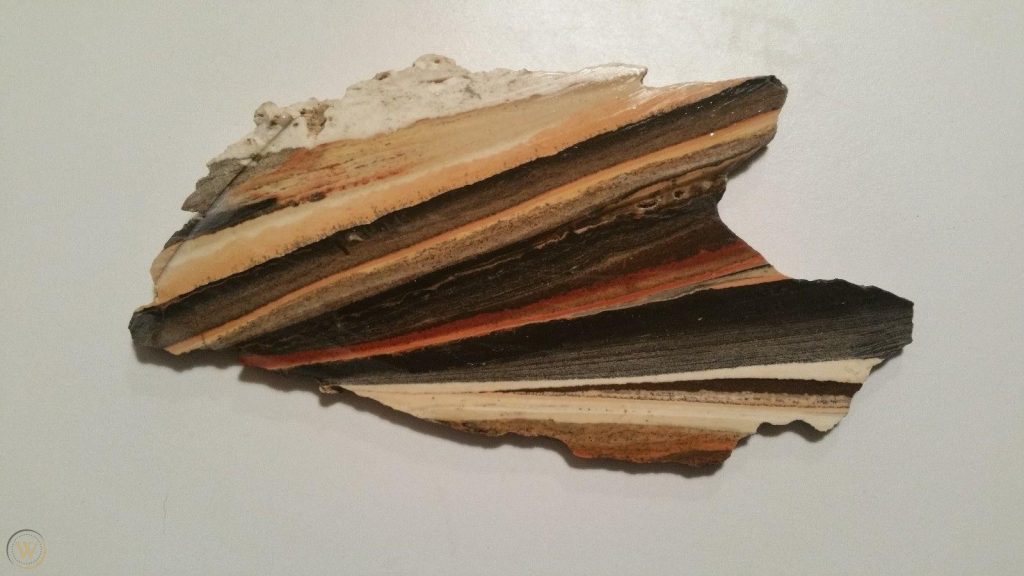 The Caribbean’s outer beauty is enchanting – dazzling turquoise seas, incredible beaches, and colorful tropical panoramas. But two of the countries found here also have their own brand of “inner beauty” – semi-precious stones found nowhere else on earth.

Found only in the Cayman Islands on Grand Cayman’s East End and the bluff on Cayman Brac, Caymanite is rare, indeed. Volcanic activity created the semi-precious stone. When volcanic ash poured down on rocks below, it formed sediments. Over time, those sediments hardened into rocks, creating a type of dolomite. Because each layer’s mineral content differed, each layer’s color varies. In the polished stones, this creates colored stripes in earth tones – browns, yellows, and whites.

Due to Caymanite’s hardness, cutting wheels and grinders need diamond tips in order to cut and polish it. A great deal of time and effort goes into learning how to work with Caymanite in order to create artistic pieces.

In addition to jewelry, Caymanite is also fashioned into sculptures, objects like business card holders, and used in inlaid tables. Its distribution is almost exclusively limited to the Cayman Islands.

Found only in one remote area of the Dominican Republic, the same volcanic forces which created the island itself forged this exquisite gem. When scorching gases pushed molten material into the volcano’s chimneys, its minerals crystallized, creating the stone’s unique properties. Over the eons, erosion broke off bits of stone, washing them into the Bahoruco River where they tumbled against rocks and other debris. By the time the stones reached the river’s end at the beach, this polishing action revealed the marbled sea-blue, green, and white hues Larimar is now prized for.

We can only speculate when people first saw Larimar, but more than a century ago, the area’s inhabitants likely came across the blue stones washed up on the beach. They may have later traced its origins to the mountains. By 1916, at least one person knew where to find it – a priest in Barahona parish, who applied for the right to set up a mining operation. His application was never approved, however, and Larimar remained shrouded in mystery for years to come.

In fact, it continued to go unnoticed by the world at large until 1974, when geologist Miguel Méndez and Peace Corps volunteer Norman Rilling found some of the stones on the beach. By following the river up the mountain, they eventually arrived at Los Chupaderos, where most Larimar is mined today. Miguel Méndez named the stone by combining his daughter’s name, “Larissa,” with “mar,” the Spanish word for sea.

Unique to the lush Bahoruco mountain range, Larimar’s scientific classification is blue pectolite. Although other types of pectolite exist in locations around the world, none are quite like Larimar. Copper gives it its characteristic blues and greens, with blue stones considered more valuable. In addition, some stones contain red, brown, or gray shades. Due to its coloring, it’s sometimes mistaken for turquoise or blue jade.

According to folklore, Larimar helps relieve stress, radiates healing energy, aids communication, and enlightens the mind. Because of claims that the Dominican Republic was the ancient site of Atlantis, symbolized by dolphins, some people call Larimar “the Atlantis Stone” or “the Dolphin Stone.”

With all the excitement about Larimar, there’s even a Larimar Museum in Santo Domingo, the Dominican Republic’s capital city. Located in a well-restored historic building, the museum contains exhibits about the gem and a store with hand-made Larimar jewelry.

Only buy jewelry from reputable stores because blue glass has occasionally been passed off as Larimar. Stores in the Dominican Republic carry the widest selection, of course, but Larimar can also be found in a small number of shops in other countries. In addition to jewelry, Larimar is also available in sculptures and polished slabs.

Travelers can take home a true piece of the islands with Larimar and Caymanite items. And those lucky enough to find Larimar elsewhere can enjoy its soothing, ocean hues without a trip to the Caribbean.

Semi-precious stones are also called gems or gemstones. They are pieces of attractive minerals which are used to create pieces of jewelry after the process of cutting and polishing. Many gemstones are hard, however there are some soft minerals that are also used to make jewelry due to their luster and other attractive physical properties. You could find them all over the globe and there are some that are very common while some that are very rare. One of the rare ones which can be found in the Caribbean area would be the Caymanite.

As the volcanic ash poured in on the rocks below the volcano, it formed sediments. And then, as time passed, these sediments hardened into rocks and created a kind of dolomite. And since the mineral content of each layer was different, the colors of the layers were also varied. With the polished stones, there are colored stripes present in earth hues such as yellows, browns and whites.

Also, because of the hardness of Caymanite, the cutting wheels and grinders used for cutting and polishing this stone need diamond tips. Those artists who want to create pieces of jewelry and other adornments put in a lot of effort and time in working with it.

Aside from being used for making jewelry, Caymanite is also used to build sculptures, items such as business card holders and is also used for inlaid tables. Travelers of the Caribbean can truly take home a beautiful piece of the islands by taking home Caymanite items.