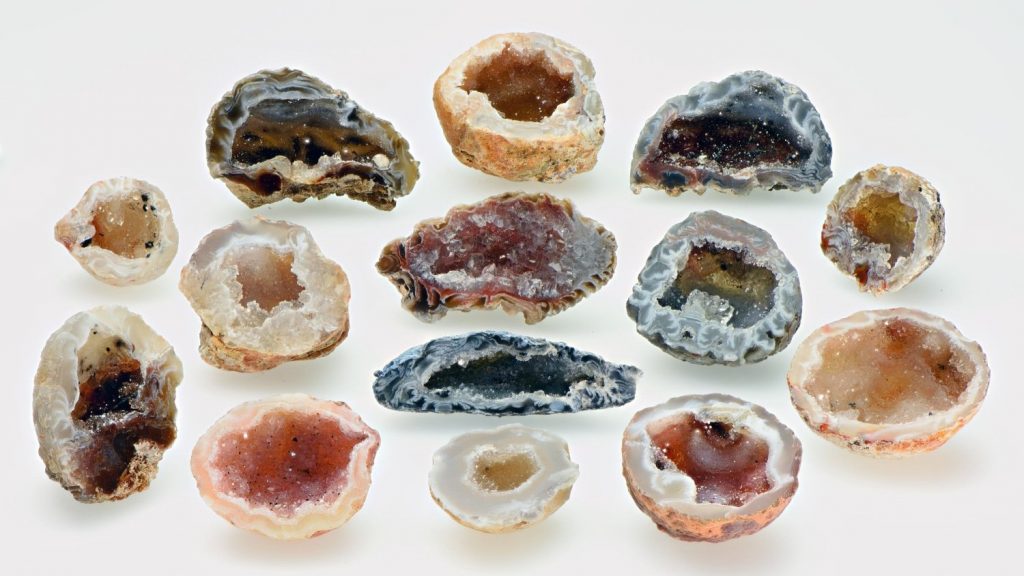 What is a Geode?

Geodes are geological rock formations which occur in sedimentary and certain volcanic rocks. Geodes are essentially rock cavities or vugs with internal crystal formations or concentric banding. The exterior of the most common geodes is generally limestone or a related rock, while the interior contains quartz crystals and/or chalcedony deposits. Other geodes are completely filled with crystal, being solid all the way through. These types of geodes are called nodules.

Geodes can form in any cavity, but the term is usually reserved for more or less rounded formations in igneous and sedimentary rocks, while the more general term “vug” is applied to cavities in fissures and veins. They can form in gas bubbles in igneous rocks, such as vesicles in basaltic lavas, or as in the American Midwest, rounded cavities in sedimentary formations. After rock surrounding the cavity hardens, dissolved silicates and/or carbonates are deposited on the inside surface. Over time, this slow feed of mineral constituents from groundwater or hydrothermal solutions allows crystals to form inside the hollow chamber. Bedrock containing geodes eventually weathers and decomposes, leaving them present at the surface if they are composed of resistant material such as quartz.

Thunder eggs, or geodes, are geological rock formations which occur in sedimentary and certain volcanic rocks. They look like regular rocks from the outside, the exterior typically made up of limestone, but then have crystal formations of quartz on the inside. They’re referred to as thunder eggs by treasure hunters because they do resemble very large eggs because of their smooth exterior and round shape. If you’re interested in any type of treasure hunting you may want to start out with these thunder eggs, or geodes.

The real value of the geodes is their appearance when they are halved and polished. Their crystal formations typically come in a wide variety of colors, from deep purple to pink, blue, and even a silvery crystal color. The formations of the rock itself leave a wavy design in the color, and the crystals on the inside emit a fiery glow. Some thunder eggs that have been found are so large that they have been made into furniture, such as coffee or side tables. Adding a base and a glass top makes the rock into a very interesting and sturdy piece of furniture.

It’s often difficult to tell what’s going to be inside those geodes until you actually split it open, and usually they require some polishing in order for them to be at their full potential when it comes to shine and brilliance.

If you’re interested in finding some geodes you need to know where to look or them. Chances are you won’t find them in your backyard, unless you live in Utah or Mexico. Other area where Thunder Eggs have been found is Indiana, Kentucky, Missouri, Nevada, New Jersey, New Mexico, Ohio, Oregon, Texas, Utah, and the Geode State Park in Henry County, Iowa. Iowa designated the geode as the official state rock in 1967.

Rock Hound State Park in Deming New Mexico is open to the public for Rock Hounds of all ages. It is known for its wide variety of mineral specimens due to ancient volcanic activity in the area. Geodes can be found littering the valley floor. Look for round or oval shaped rocks with a lumpy surface similar to the look of a cauliflower. Use your rock hammer and break open the rock. There is no easy way to determine what you have until you break the rock open. Thunder Eggs are also found in the rocky crags of the desert walls. Watch out for snakes and scorpions when reaching into any rocky outcropping.

According to Wikipedia, a large geode the size of a minivan was discovered in Ohio in the early 1900’s in an area now known as Crystal Cave. You can actually take tours of this area during the summer. While it’s unlikely that you’ll find any geodes as large as your vehicle, the point is that they are obviously out there and can be quite valuable.

When searching for thunder eggs it’s best to have with you a reliable guide that maps out areas of the dessert or certain cave formations where you may find them. It’s also imperative that you pay close attention to your own personal safety and never go spelunking or exploring in the dessert alone and without proper precautions. There are no geodes that you may find that are worth your own personal life and safety.